Pretty sure I have mentioned how cool SOAS is.

The vibe there is great, the students are very clever, politicised and passionate about their subjects.

So, it is always a great pleasure to get the call to go in and take some portraits of their students for the latest campaign. 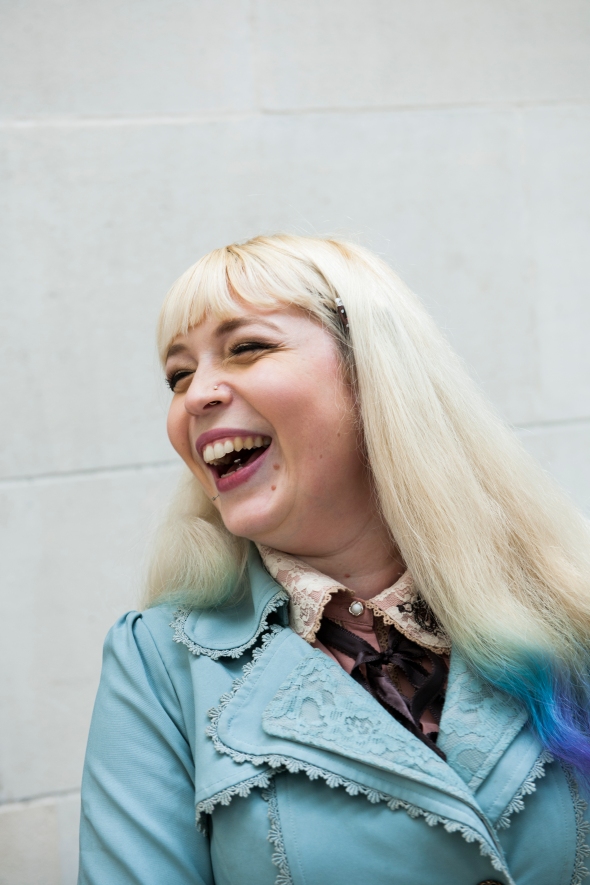 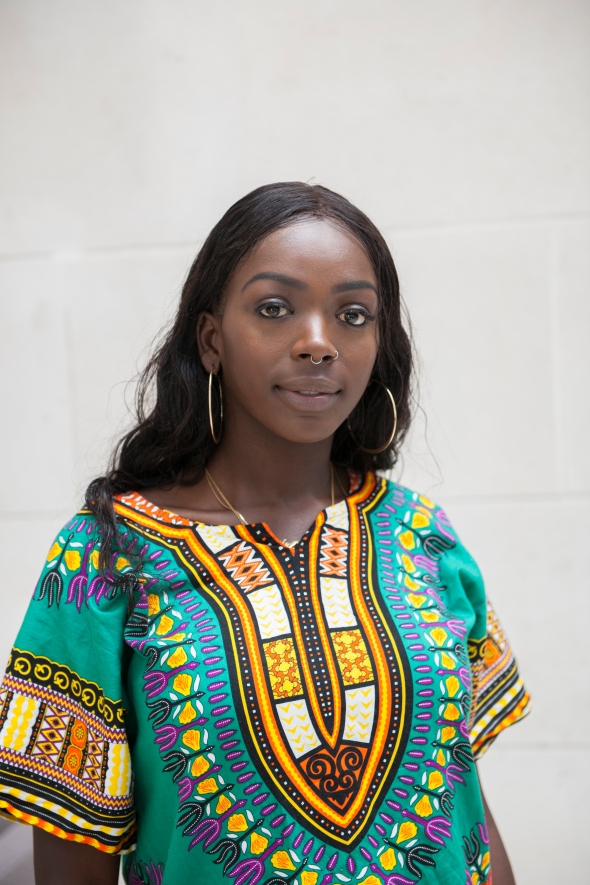 Bill turned 18 in July, so we had the best ever summer party for her and now she is off to college for three years!

I was so proud of her as we drove up to Derwen College in Shropshire. We had visited the college on a few occasions and knew it was great, as a number of our friends children go there. It is a college for 300 young adults of varying degrees of physical and learning disabilities, some of which are quite profound.

I had already witnessed the level of care, respect and understanding of the staff to the students, so we knew she was going to be in safe hands, but that didn’t stop us crying like babies as we got into the car after having settled her in!

(I am writing this in February of 2018 and I can report that she LOVES college. She is amongst her peers and has made some great friends and as of a couple of weeks ago she has a boyfriend! We miss her terribly, but can facetime etc, so she is never far away.)

I don’t have any photographs of Derwen, but I did spend a lovely few days at Culford school taking photographs for their brochures and website. Culford school is a boarding school set in 480 acres of beautiful Suffolk parkland. They are a centre of excellence for tennis and golf, there is a wonderful atmosphere and it is not in any way stuffy.

I took many images and I’m not sure if they will use it, but these two were my favourite shots of the day!

And Die Zeit were on the phone again and it was lovely to see these guys printed in the newspaper. Is this summer proper?

Lets pretend that it is and do some summery things.

A swim in Hampstead ponds anyone?

We have friends who take a dip in Hampstead ponds nearly all year round. I’m not quite that brave, but I did drag the two girls up there one Saturday afternoon to take a dip and it was lovely!

I occasionally drop off my son at ‘I can dance’ where he volunteers and then go for a Parkrun on the heath. I keep meaning to go for a swim after, but haven’t got round it yet….

If that sounds exhausting then doing a 60 mile bike ride around Norfolk, when you are not really a cyclist, is quite tough. Sore bottoms all round, but very enjoyable!

Somewhat more leisurely was the Prudential bike ride around Central London. I hired a tandem for myself and Billie-Jo and off we all went. The roads were closed and it was great fun…..until we lost Daniel….and it started to pour down. Well worth it though.

We finished the London Capital ring, so next on the list is The London loop.

The London Outer Orbital Path — more usually the “London LOOP” — is a 240-kilometre signed walk along public footpaths, and through parks, woods and fields around the edge of Outer London, England, described as “the M25 for walkers”

The first stage is from Erith Riverside to Old Bexley Village and then on to Petts Wood.

We came back from walking Hadrian’s wall and the Capital ring thinking why on earth  hadn’t we photographed at least one person each day. So this is what we are going to do on each leg of the walk and first up is Bill and his dog buster!

So that was all nice and even nicer was a call from Die Zeit asking if they could use some of my animal portraits for a regular section they run called ‘You look like I’m feeling’. 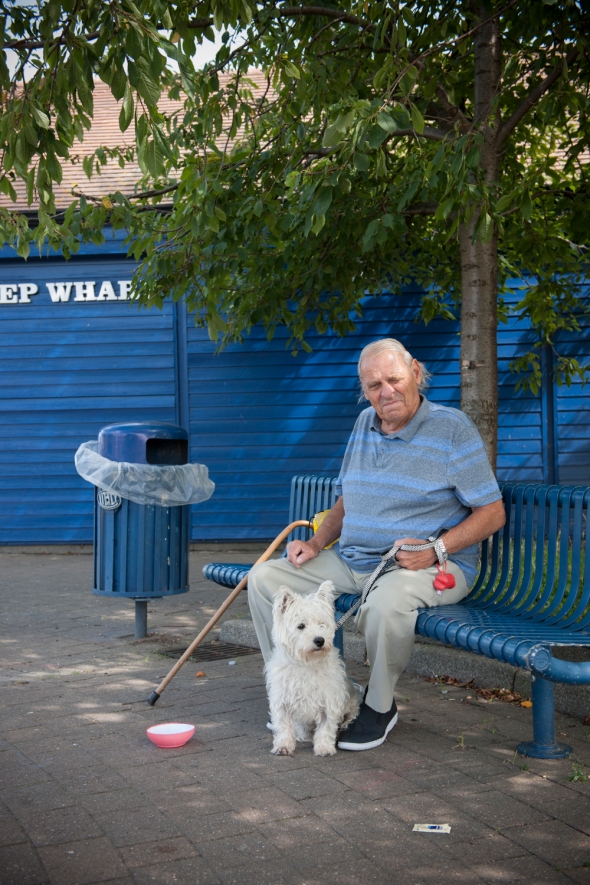 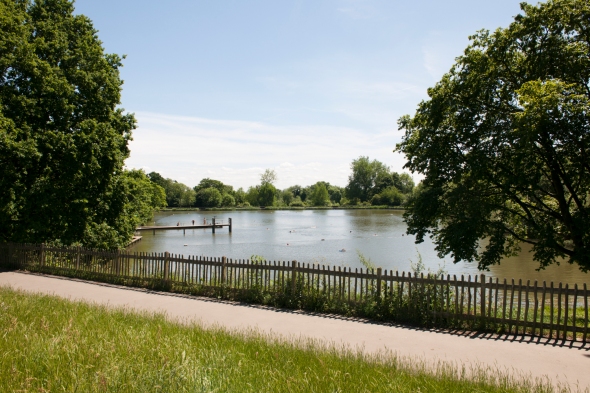 The lovely team at Ulaw have been keeping me busy taking portraits of their Alumni, for their ‘Set for Success’ campaign.

It has been really interesting to see the diverse range of jobs alumni of the University  have gone into. 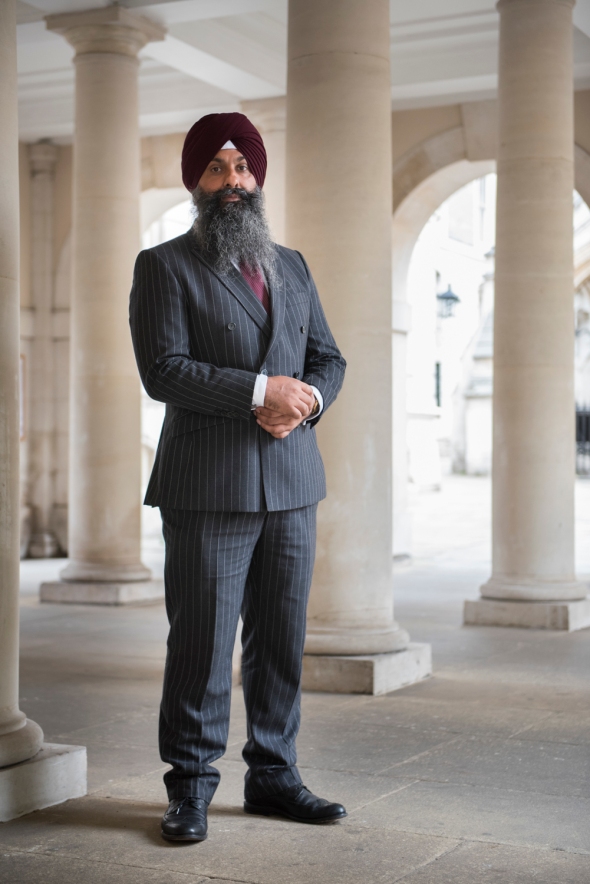 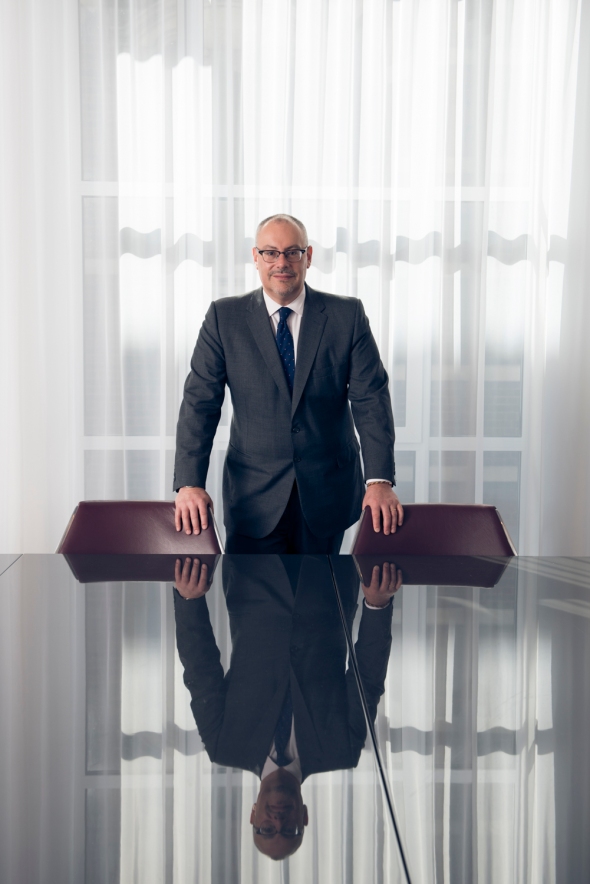 Well, it is pretty much summer.

A trip over to Cyprus to pick up my god daughter Tiggy. Tiggy is over from Australia with her sister Daisy and dad Andy. Myself and Fiona went to college with Andy and I was best man at his wedding. His eldest daughter Daisy has had a bit of a time of it over the last few years. She has a tick borne disease that has caused chronic fatigue amongst other things.  They are in Cyprus so that she can have Hyperbaric Oxygen Therapy, which entails sitting in a tank having oxygen pumped into your body. (I am writing this seven months on and the treatment seems to have done something, as Daisy is much further down the road to leading a more normal life. )

You can read about her journey here: Daisy’s Perspective

They are great kids and it was wonderful to spend time with Tiggy. She got off the plane and we took her straight to the colour run in Wembley, she took the slide down the tower in the Olympic park and I took her and a gang along to Stonehenge again for the Summer solstice. I do love it there!

A little film by my son Daniel. 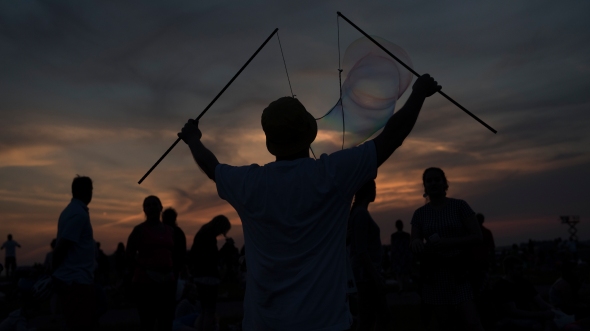 Back to the animals and a trip down to see Michael the parrot man.

It was a bit of a wet day and Michael, who takes in unwanted and sometimes neglected parrots, was cleaning the cages outside, so by the time we came to shoot the birds they were all a bit soggy!

It was a bit of a brighter day when I went to visit Jamie Brewer at the Pointers farm in Bucks.

Jamie is passionate about farming and rare breeds. He has Middle White Pigs, Hampshire Down Sheep and pedigree Longhorn and Highland cattle. The small farm is just perfect and the animals are treated with the utmost respect and care by Jamie who regularly wins awards for his cattle.

I had met Jamie a few years previously when I had taken a portrait of one of his Highland cows at a show in Herefordshire, for Modern Farmer magazine.

The highland cattle inquisitive and very shaggy, are of course quite beautiful to look at, especially as they laze about in a lush Buckinghamshire field. 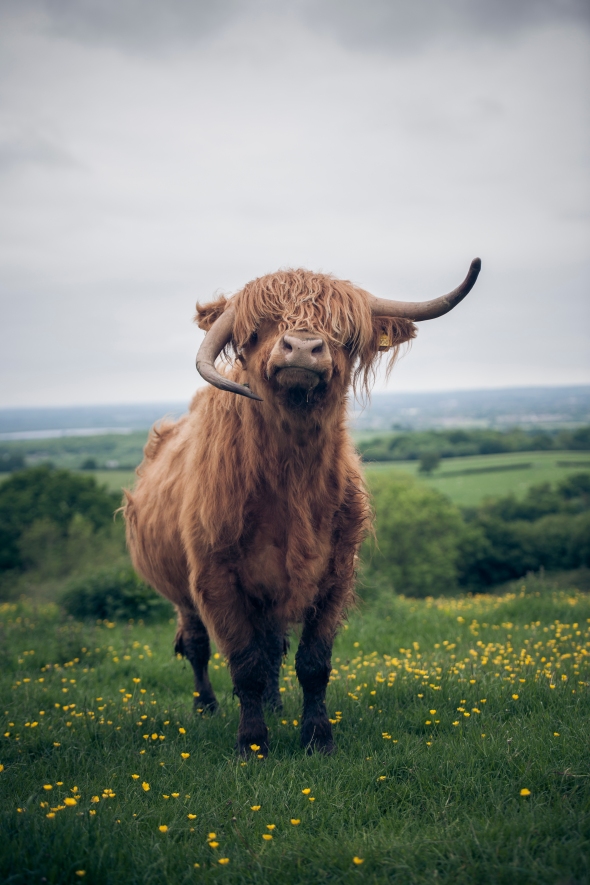 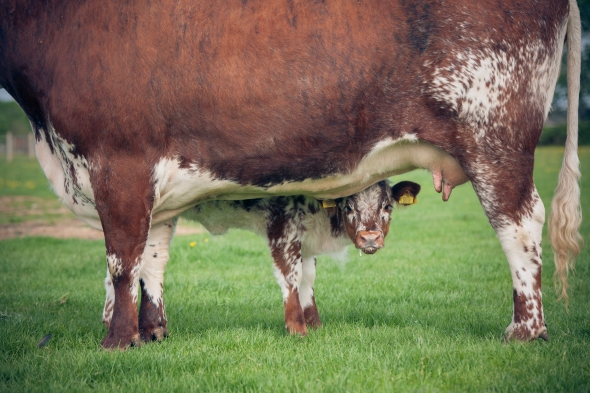 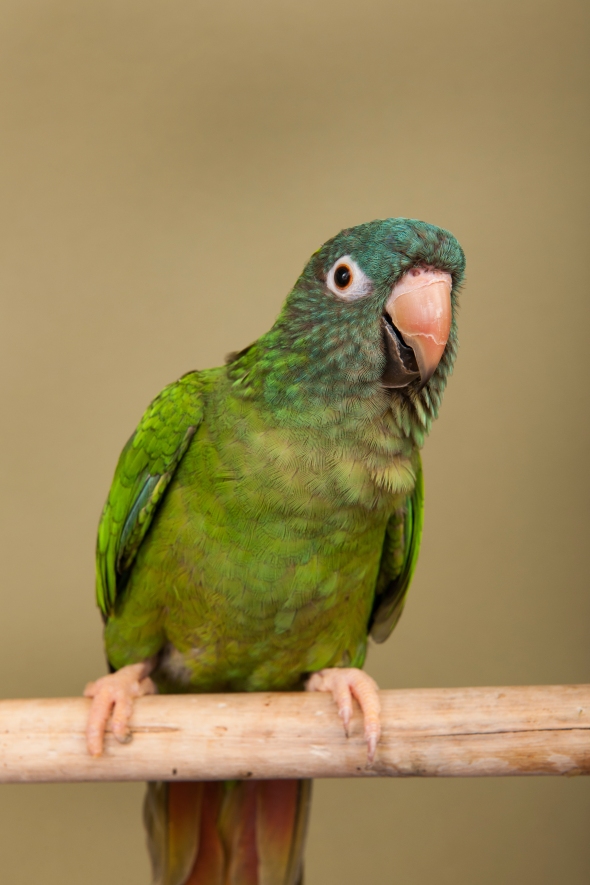 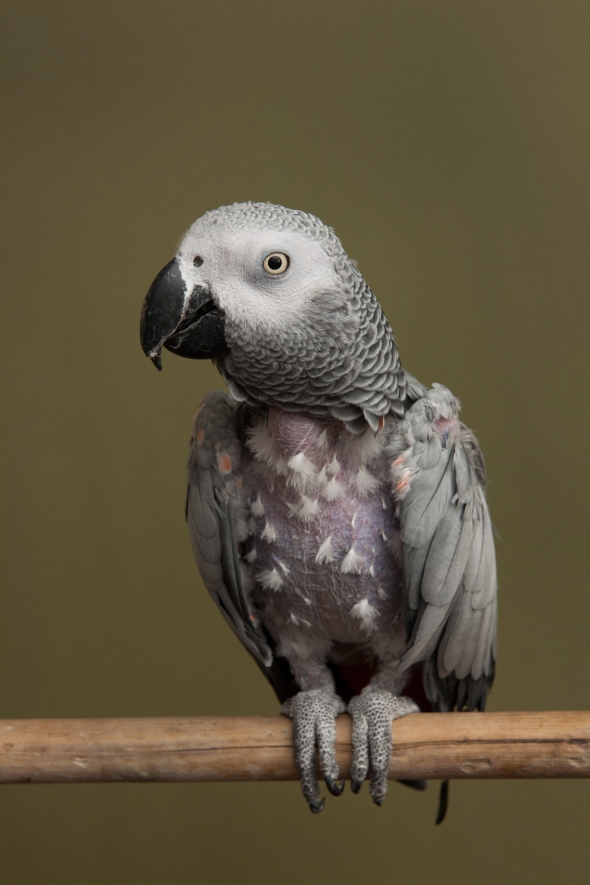 Spring has sprung so I decided to get a portfolio printed up.

I haven’t had a portfolio for many, many years and I hope that this one will actually see the light of day and be taken to see people. I’m not the best at calling people to see if they want to see my folder!

The very clever Marc and Matt at MPrint have done an amazing job printing it double sided and I almost don’t want anyone to touch it, as it looks so beautiful.

The wonderful Cathy Robert has made the folder and case and it looks just perfect! I had my last folder made by Cathy well over ten years ago!

I have had the portfolio printed because I wanted to show my animal portraits, but as usual it is people that I photograph the most.

These guys are the cast of a new BBC comedy show called More Money Than Sense and are: Andy Zaltzman, Dominic Frisby and Shazia Mirza. 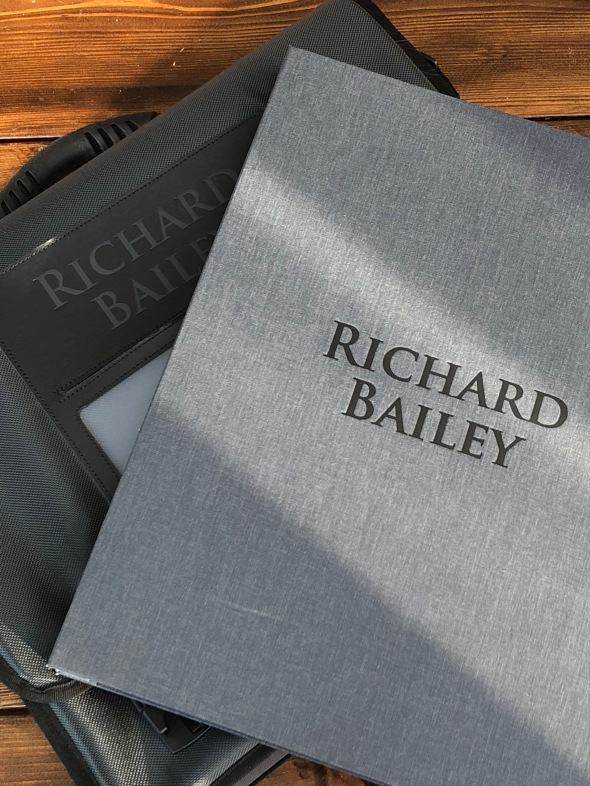 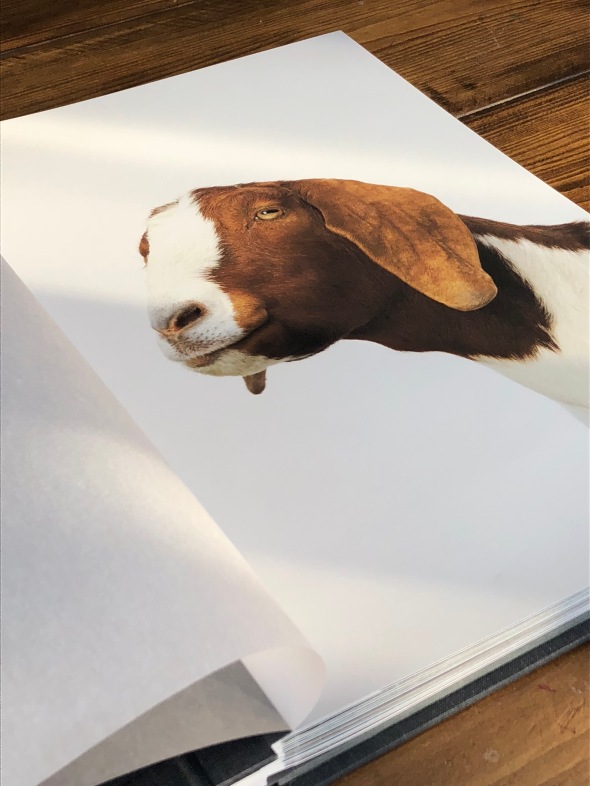 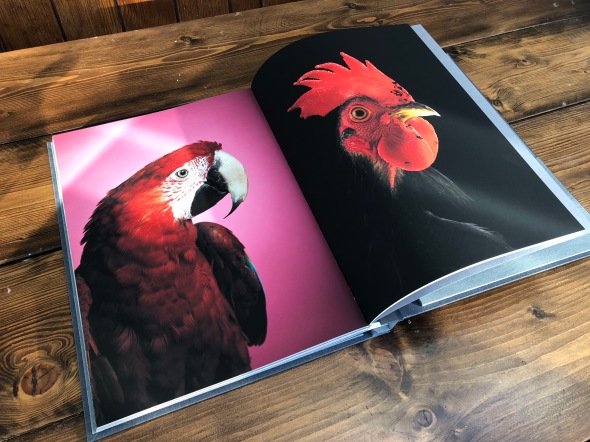 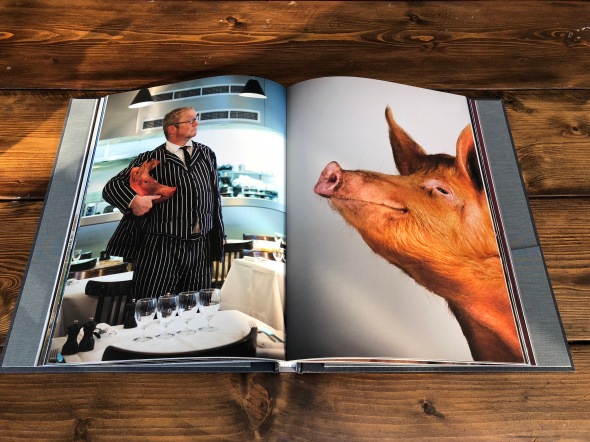 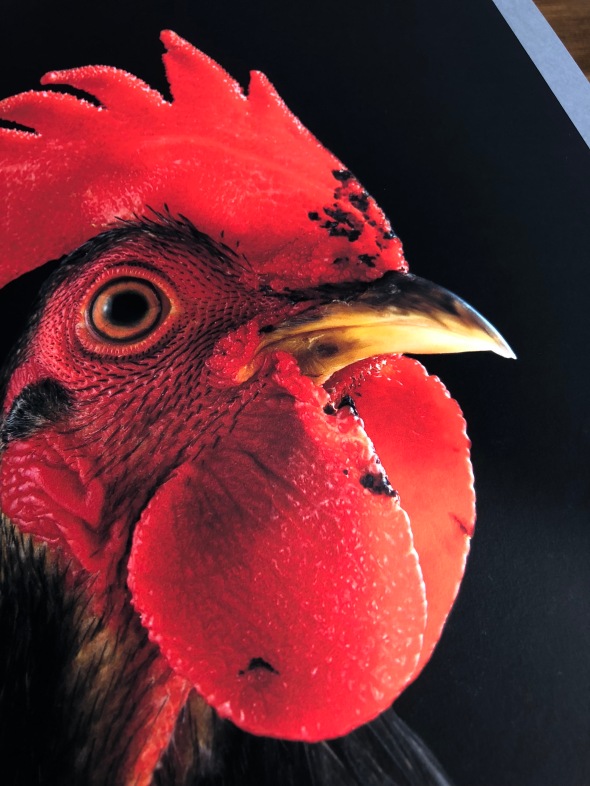 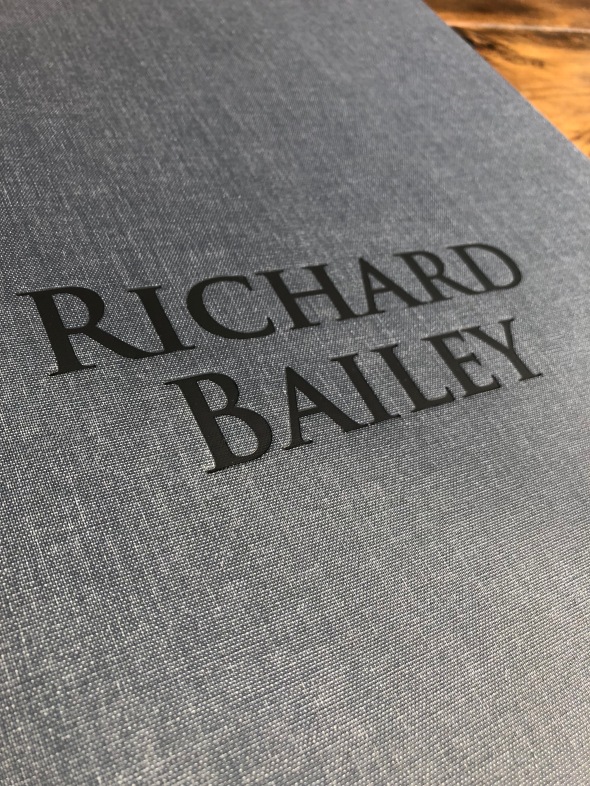 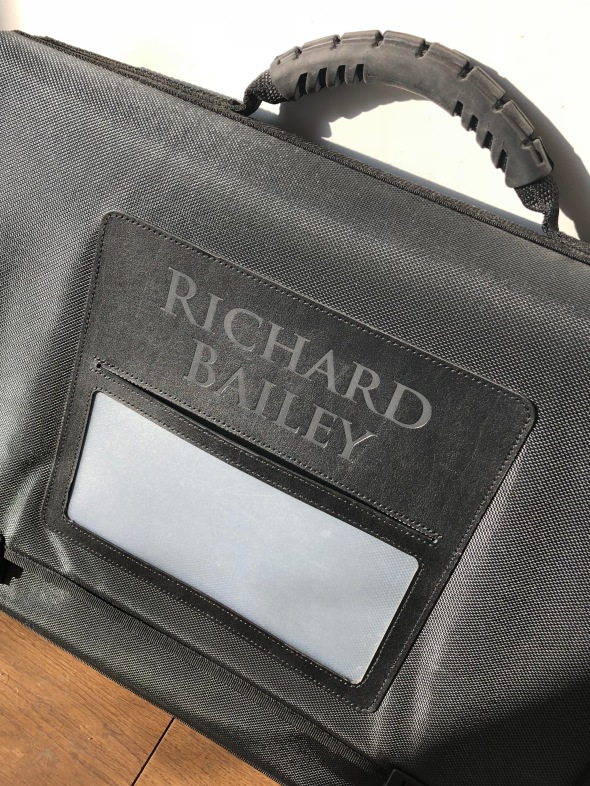 I started ‘going out’ with my wife 31 years ago!

We were both on the same photography degree course at art college in Harrow, now Westminster Uni. At the beginning of 1986, about 15 of us from the course went on a three month exchange trip to study at the Bezalel college of art in Jerusalem.

It was a fabulous time, not least because it was just before the first intifada which meant that we could happily hang about in the old city eating falafel and drinking mint tea.

Myself and Fiona hitched all over Israel and came back with many fond memories of the people that we met and friendships that have remained to this day. Including, of course, the woman who is still my best friend and who I love more every day.

We all took a lot of photographs of each other and it looks like I didn’t mind having my photograph taken!!!! (Here are a few phone snaps from the album.)

When we were young….. 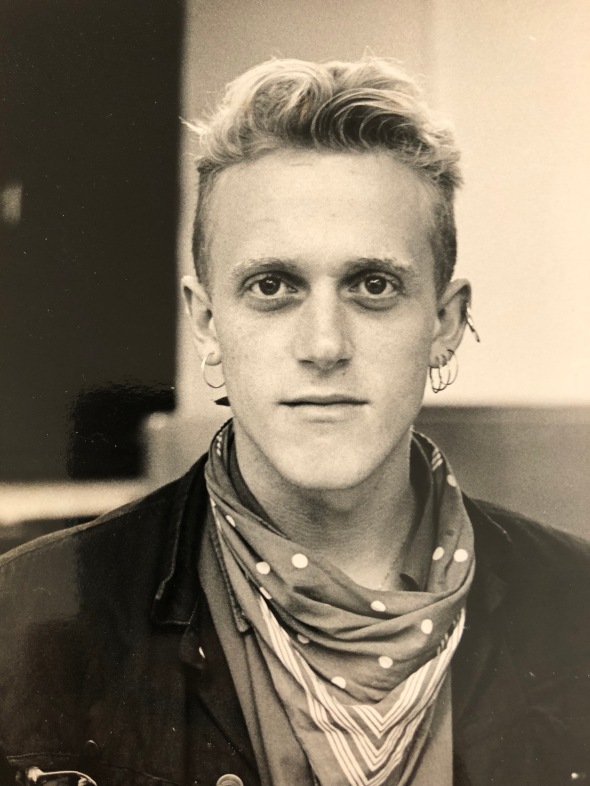 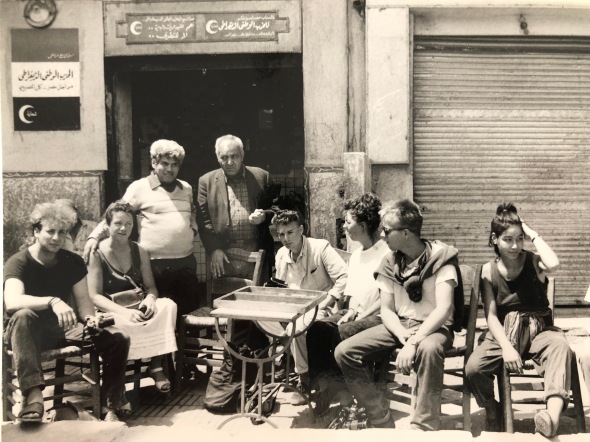 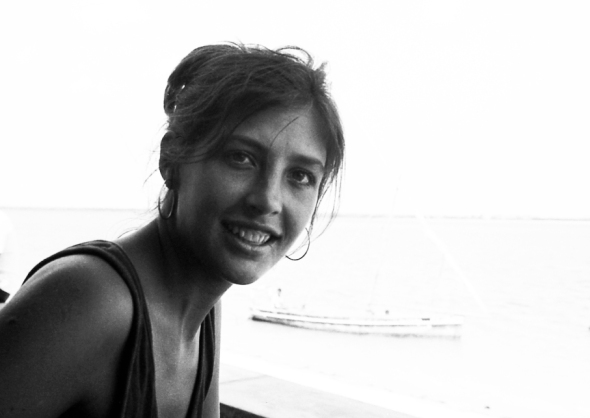 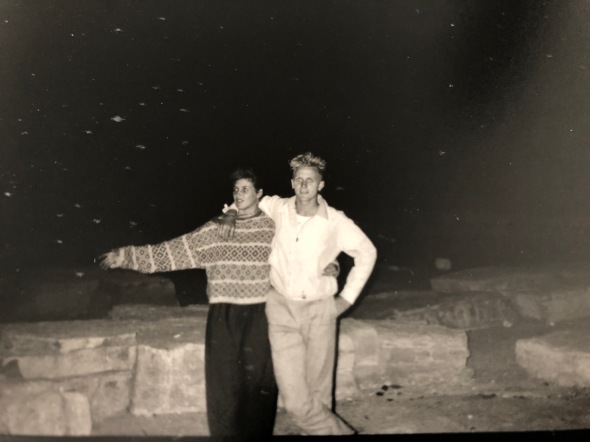 Me and Fiona at the foot of the Great Pyramid in Giza. 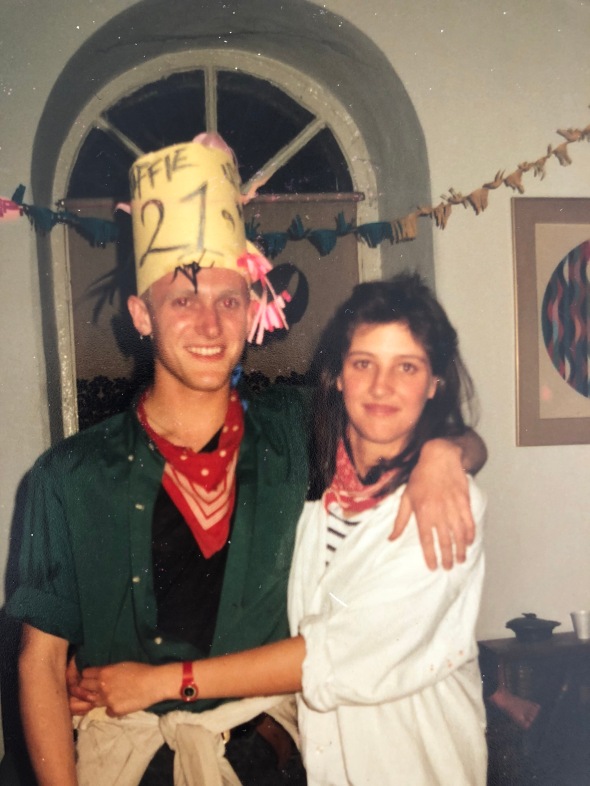 Me and Fiona at my surprise 21st Birthday.

And just a couple more of me posing……..

Birthdays, The Theatre and Absolutely…….February 2017

BIRTHDAYS, THE THEATRE AND ABSOLUTELY…….FEBRUARY 2017

It seems as though the only time we go to the theatre is if someone asks us, it’s a birthday or if we know someone in the play. This time it was our good friend Nick Kahn, who was in the brilliant West End stage production of The Kite Runner.

It was great to see him up there doing his thing and we also got to see him in a production of Mice and Men at the Regents Park open air theatre later this year, which was a real treat.

Photography wise I was back with those funny folk from Absolutely.

Absolutely was a comedy sketch show which ran for four series on Channel 4 between 1989 and 1994, with Moray Hunter, Jack Docherty, Peter Baikie, Gordon Kennedy, Morwenna Banks and John Sparkes.

The team have come back together for four new episodes airing on Radio 4.

You will have seen Gordon Kennedy in many things, most recently though he has an ‘interesting’ and eye watering part at the beginning Trainspotting 2!

So this is slightly odd…..because I am writing this at the end of January 2018!

My to do list throughout the whole of last year was to write for this blog…….but, stuff happens and it drops down the list. I am nothing if not tenacious though and if I say I am going to do something, then I will!

So I am going to whistle through the next twelve months with a few snippets of what happened here and there.

So, this year started off nicely with a call from the Foreword Indies, who let me know my book Darwin’s Pigeons had won an award in their yearly competition.

Well, thank you very much!

There were trips up to Birmingham for the University of Law and it was also Chinese New Year.

The year of the Rooster! (Or Cockerel if you are British.)

Chinatown in London is a vibrant, exciting and busy place at any time of the year, but during the celebrations in really comes alive.

I was down there taking general mood and atmosphere shots for a company that owns a lot of central London, including Gerard Street.

As you can see it gets VERY busy, but is all great fun and a wonderful atmosphere.

I was also in the area getting general shots of the evening nightlife and going all Nighthawks by Edward Hopper!!! 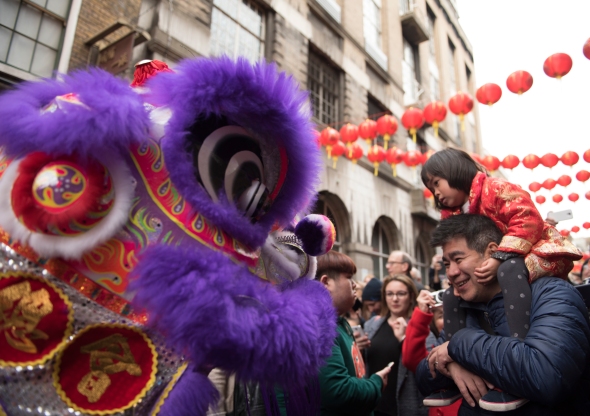 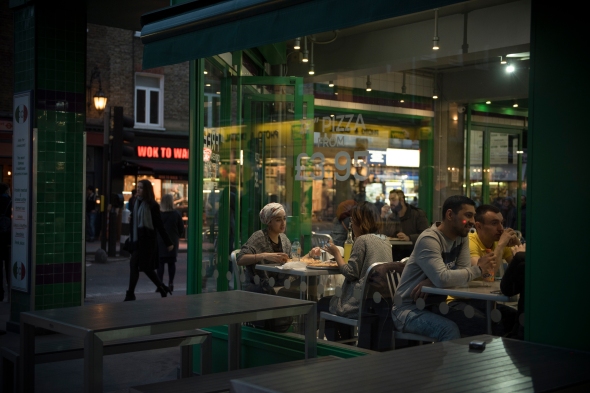 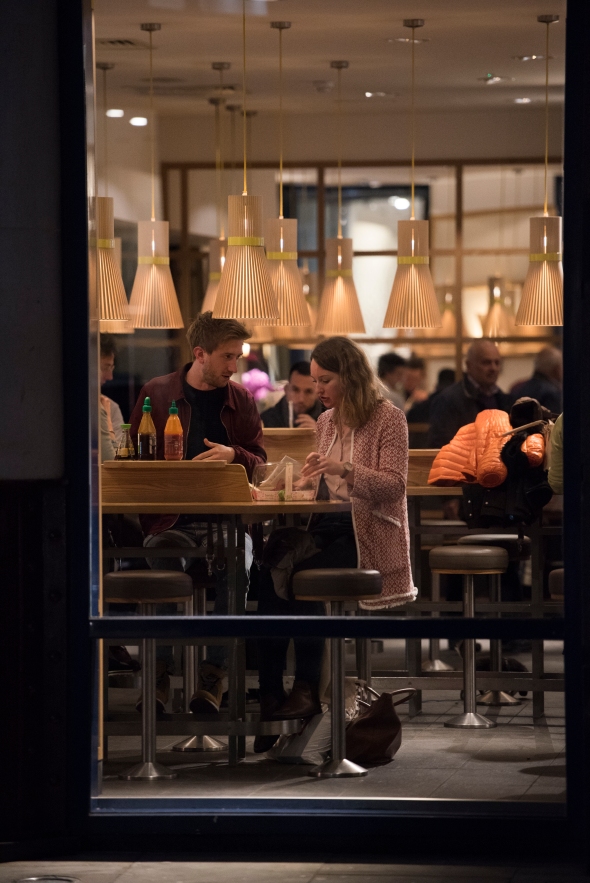