One of the reasons I wanted to pursue a carer in photography was the work of Don McCullin.

He is by far the best documentary photographer the world has ever seen, his images are so strong and evoke such a response, in me anyway, that I wanted to be a documentary photographer. He had a massive retrospective of his work at the Tate, so of course I had to go down and take a look. I had seen the majority of the images, but there were a few gems from his work in the ‘impoverished North’ that were new to me. It was a very busy exhibition and not ideal to stop and linger in front of the prints, but then quite a lot weren’t the sort of images you would want to linger in front of.

His work made me want my work to make a difference.

Whilst at college in London I went on all the marches and found myself being chased on many occasions, sometimes by the police, but mainly by the far right.

The problem was I couldn’t help but get involved……..so I soon realised that being a documentary photographer was not for me.

But, McCullin’s work showed me the power of the visual image and the feeling that I wanted my work to say something has always stayed with me.

And….based on messages that I have received and talking to people I have met at the exhibitions, I do feel that my work with the Shifting Perspectives group has affected a change in many peoples minds about Down’s syndrome and I am more than happy about that.

2001 A SPACE ODYSSEY is one of those films that apparently everyone should’ve seen.  Late at night I have turned on the TV and seen chimps throwing sticks in the air, but never got much further and have never seen it all the way through.

The BFI on the South bank were showing the original 70mm film, so me and Fi took ourselves along. Well……..it was 50 years ago and it is pretty outdated but incredibly futuristic at the same time. We giggled when we saw ‘Rigsby’ turn up, but then the ‘FaceTime’ call from the space station orbiting the moon was way ahead of its time. Hal the computer didn’t have nearly a big enough part and then it gets all very weird and psychedelic and very loud for a long time! It certainly makes you think about it, and I am still thinking about it, but I can’t say I would rush to watch it again.

Not the best film review ever, but pretty weird and very loud about sums it up.

SULTANS, ELEPHANTS AND BREXIT AND TRUMP…….APRIL 2019

I love a good protest march and there have been plenty to go on recently.

At the beginning of April came the news that Brunei was passing a law that would punish gay sex and adultery by stoning to death.

The celebs had come out calling for a boycott of the Sultan of Brunei’s hotels and not being a regular at The Dorchester, the next best thing would be to stand outside and shout that in this day and age this is not acceptable.

Looking online to see if anybody was heading down there I saw something for the Saturday, the kids were all at dance etc on the day, so I called up my brother in law to see what he was up to.

A small but vocal group made themselves heard and along with the global condemnation, at the time of writing Brunei have backed down from this draconian and medieval law.

I took a few selfies with my brother in law and I’m sure people were thinking ‘well they make quite the odd couple’!!!

Next up was the anti-trophy hunting march.

Nothing depresses me more or makes me sadder than when a photograph pops up on social media of a hunter proudly standing over the freshly murdered corpse of a lion, giraffe, elephant, bear etc.

I can’t comprehend it at all.

People will say these wealthy hunters are injecting money into the community by shooting these animals.

Well, I would say don’t shoot the animals just put the money straight into the community.

The kids and Fi came with me on this one and another small but vocal group made clear their views.

There was only one awkward point when we were all outside Downing Street. A Pro-Brexit march came trudging down Whitehall toward us. I stood looking disapprovingly at them as they walked past, until they started shouting ‘good on you’, well done’ and ‘completely agree’, at which point I had to raise a weak smile and even gave one of them a thumbs up…… !

Our kids had bunked off school a few weeks before and been on the youth Eco march and then we had the Extinction rebellion guys organising a protest London has never seen before.

Massive disruption and yet still Non-violent!

Fiona and I grabbed some bikes and cycled down to Marble Arch, along to Oxford Circus, down to Parliament Square where we had some free pasta served up by the Hare Krisnas and then along to Westminster bridge.

I found it quite moving to see how many young people were involved.

The people sat down in the middle of the road who were being arrested were thanking the police for doing a great job!     (And not in a sarcastic or antagonistic way.)

I went down a few times and from the amount of people who were tidying up the litter, the people cooking free food to the volunteer lawyers it was a wonderful and very important protest.

The orange buffoon is coming back to England in June, so no doubt there will be some funny chants and placards on a march through London and other towns in Great Britain, showing how much we in the UK disapprove of this awful man.

At the time of writing he has been and gone. The march wasn’t as big as last time, probably because it was wet and mid-week, but there was still a good turn out.

He of course, didn’t see anybody and any protests there were, were ‘political’ and fake news!! 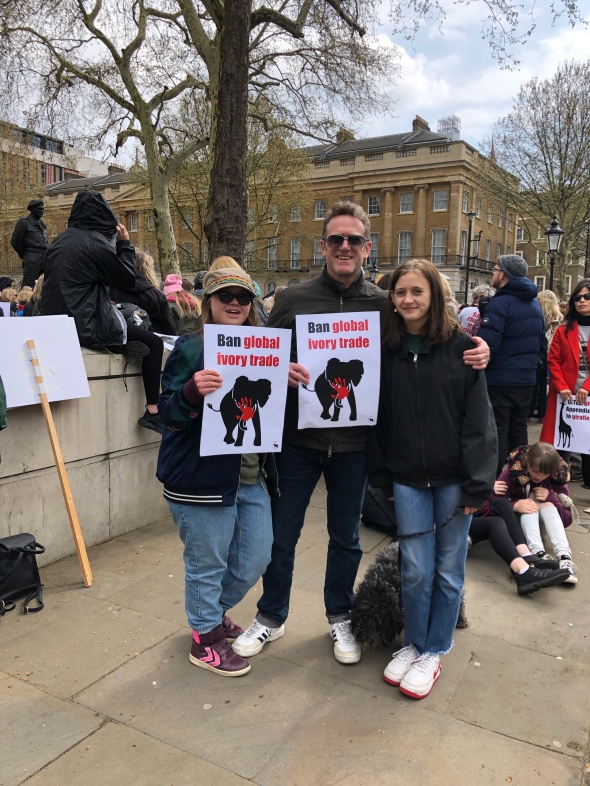 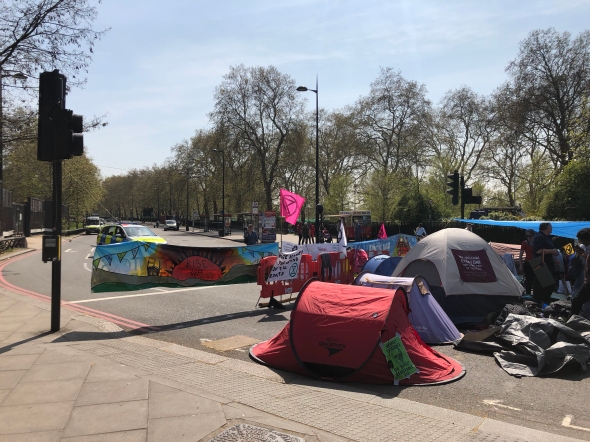 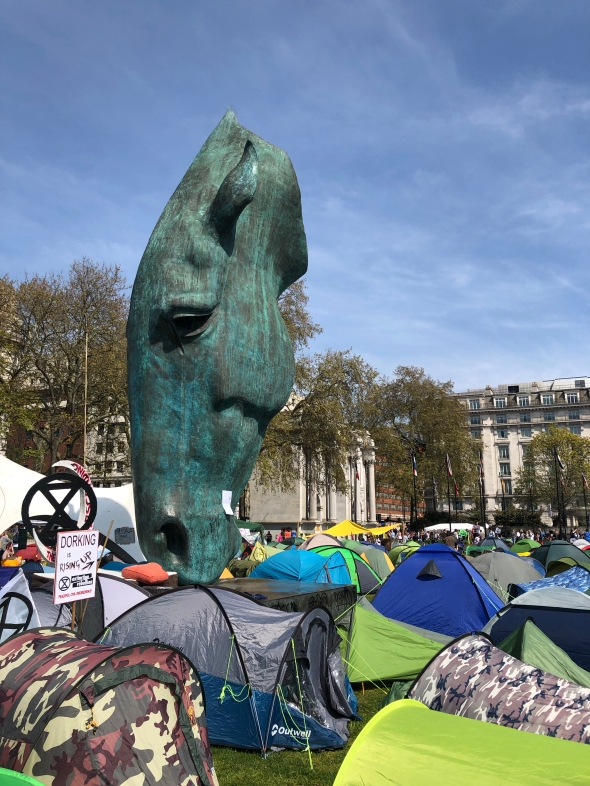 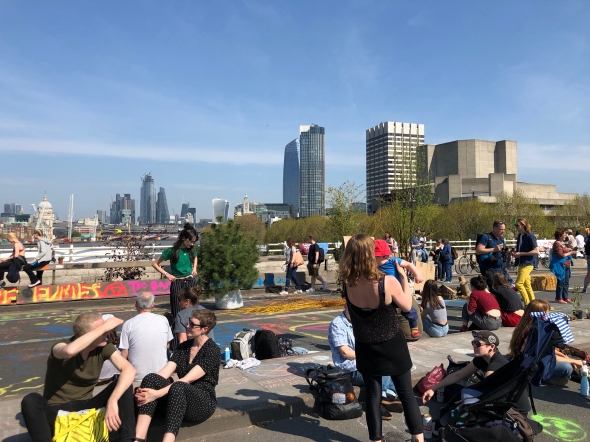 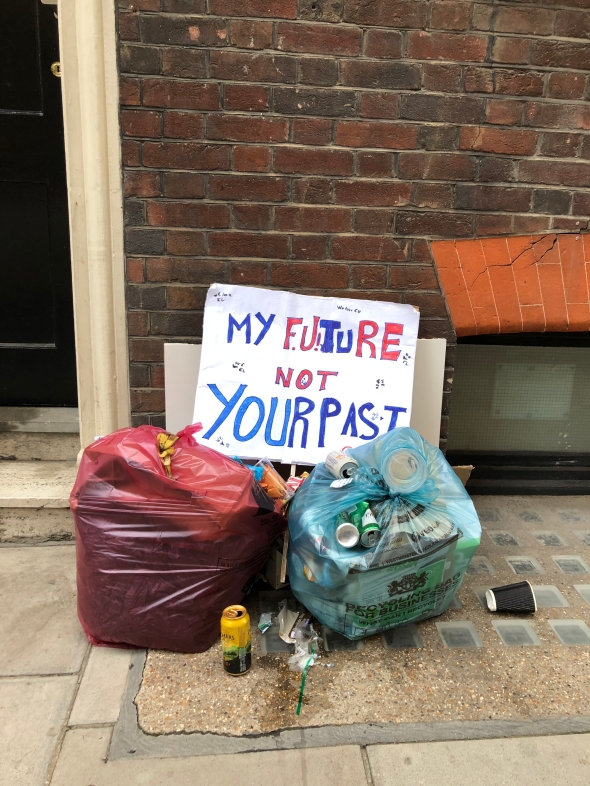 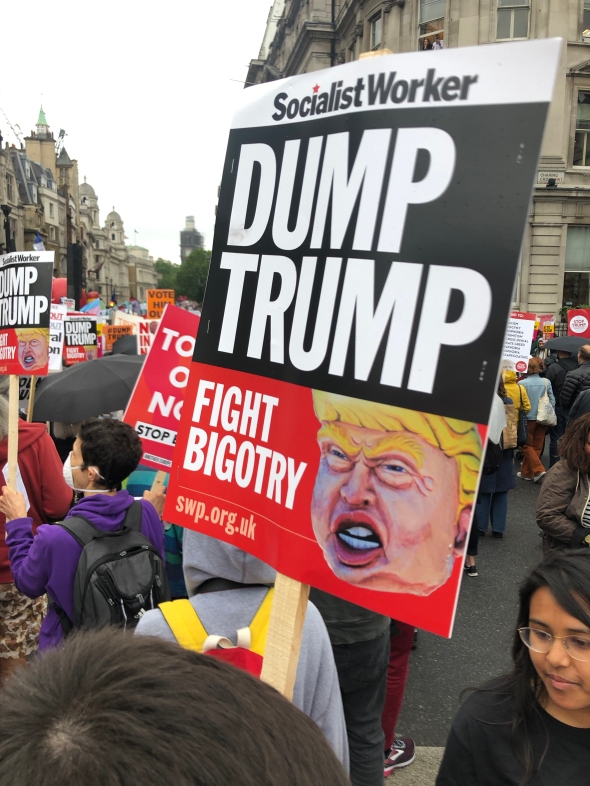 Die Zeit run a weekly feature in their newspaper of an animal with the headline ‘You look, How I feel’.

I have had about 10 of my images used over the last year or so, some of which are below.

And I had a nice email from the International Color Awards to say my portrait of a Peregrine Falcon was a finalist in the animal category of the awards. (It didn’t win, but still nice.) 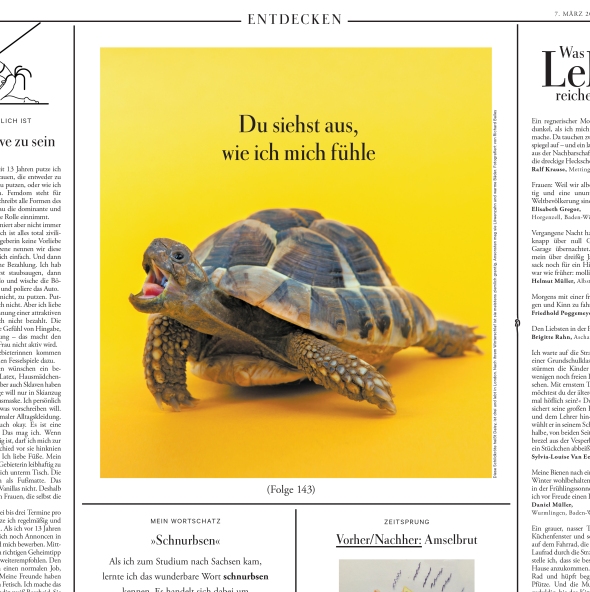 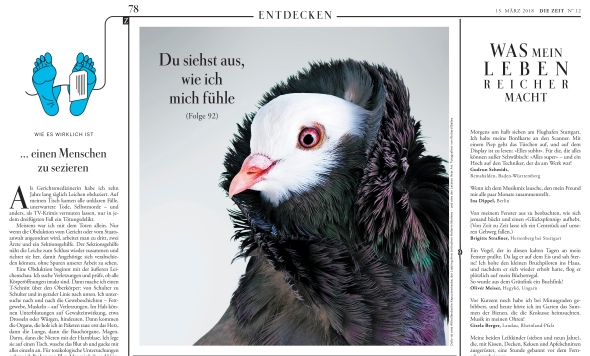 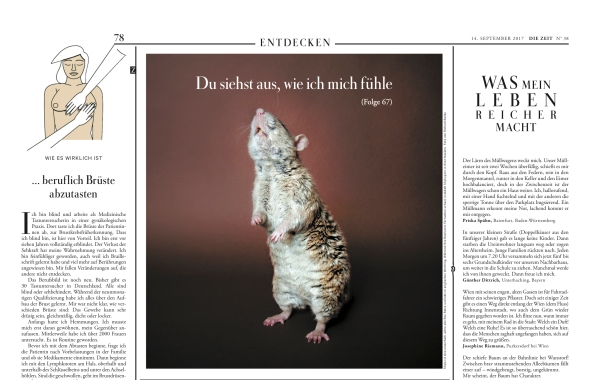 Here we go again, playing catch up and writing this in April!

February was a bit well….February, so here are some photos of my perfect Billie-Jo.

I have recently done a podcast and also taken part in a Netflix documentary with her and as we have just been going through some of her phone photos and picked a few out, I thought I would post them.

She particularly liked the one of her and her boyfriend George and the film of me with bird poo on my head! I was always told it is good luck if a bird poo’s on you and I’m sticking with that! 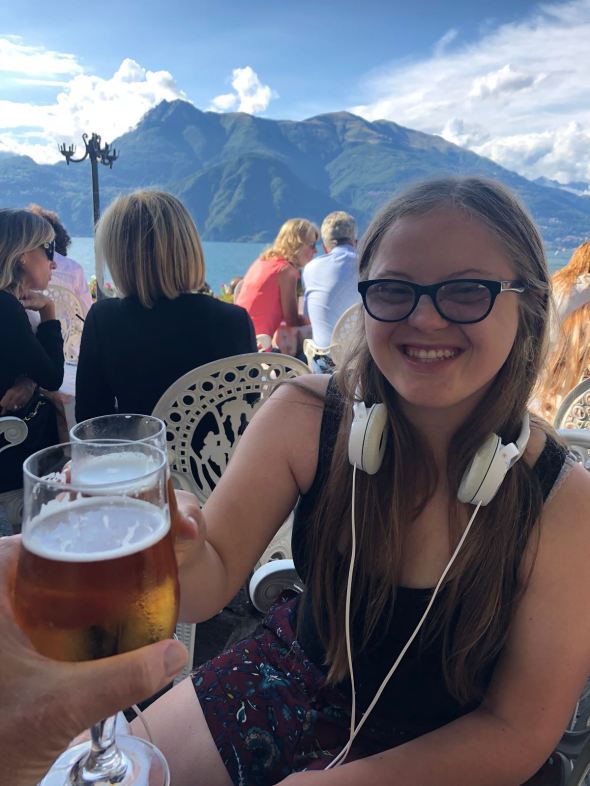 I have always enjoyed working for charities and early this month I headed up to Manchester with the wonderful team from Consider Creative to see the ground breaking research the British Heart Foundation is funding. I’m glad that there are people like Dr Adam Greenstein out there toiling away to find the answers and cures to the worst diseases and conditions out there.

It is also the Down’s Syndrome Association’s 50th birthday next year and I have had a couple of meetings with them about what we can do to mark the date and one of the suggestions was for me to do a podcast. Well, never one to turn down a new experience I gave it a go and you can hear the first series here, where I speak to three young adults who have Down’s syndrome and two parents of children who have Down’s syndrome.

One of the people I talk to is my daughter Billie-Jo, we just have a bit of a chat about life and stuff. It is pretty good fun and not too long either, which is always good!

Have a listen here:

It has been a pretty busy and fun year!

To end it off a trip to Stonehenge for the Winter Solstice and 19 round our kitchen table for Christmas dinner.

The Solstice at Stonehenge I LOVE!

Turkey’s on Copas Farm and me talking to them!

I was shooting something for Die Zeit and Getty at a Turkey farm just up the M40 called Copas Farms. I haven’t eaten meat for over thirty years and stopped mainly because I was appalled at the treatment of the farmed animals and the overall commercialisation of the meat industry.

However, had I seen a farm like Copas, where the birds are organic and free-range, left outside to roam and are guarded from foxes by Alpacas, I may well have re-considered. A Copas Turkey was on our Christmas table and everybody said it was the best tasting Turkey ever! 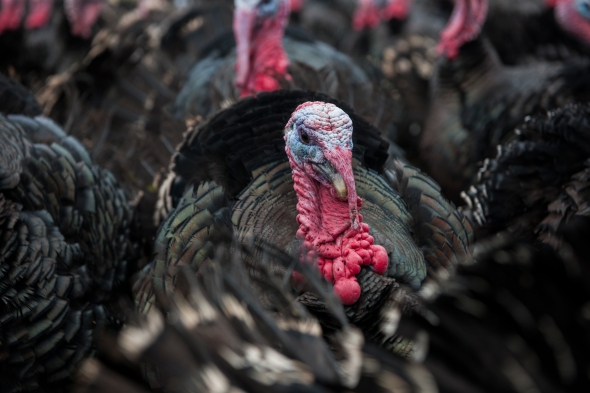 A quick trip up to The National Poultry Show in Telford to take a few portraits of the finest poultry in Europe!

The White Campbell Drake has already ended up in the Die Zeit ‘You Look How I Feel’ section. 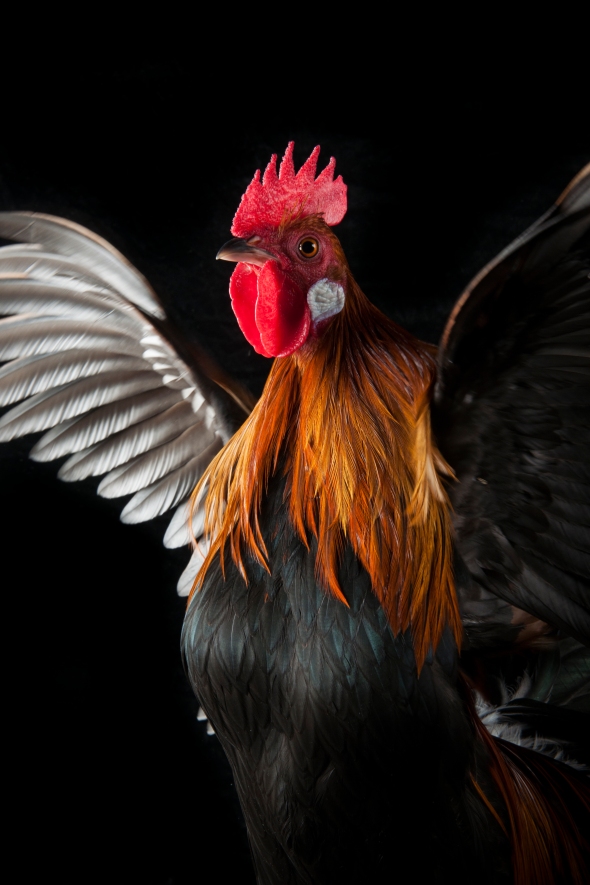 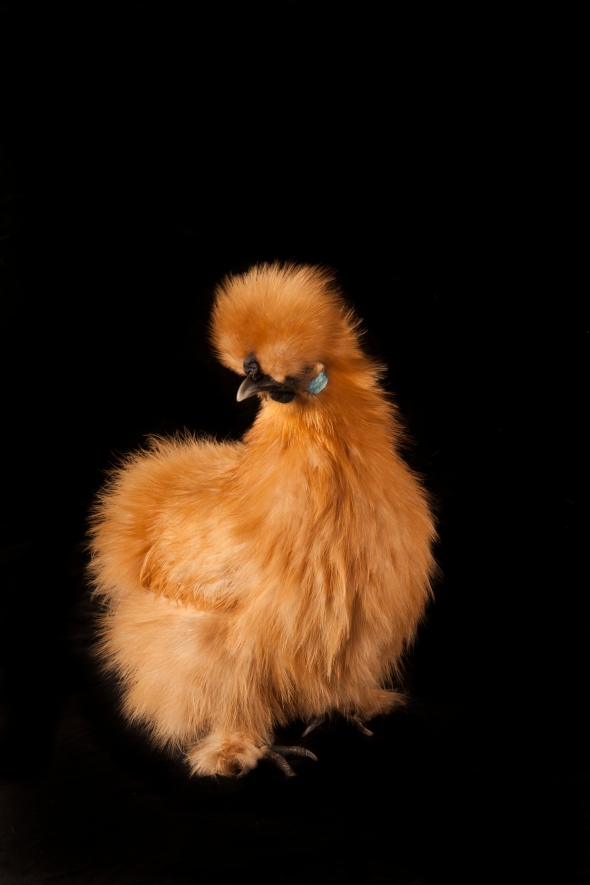 October gets off to a great start.

I went to see a photographers agent called Mark Gibson, with my animal portraits.

He liked my work, I liked him a lot and now he is representing me!

He has just launched his new website which you can see here:

I am looking forward to working with him and producing some beautiful images of animals…….and of course the odd human.

In the meantime, I have been working on a project with horses and visited some stables in Sussex.

Can’t show you the project images yet, but here are some of the out-takes along with some quite 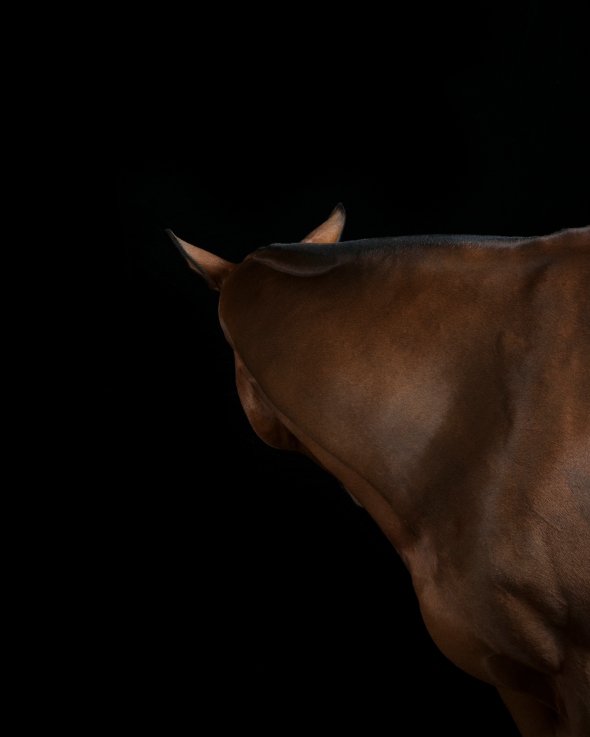 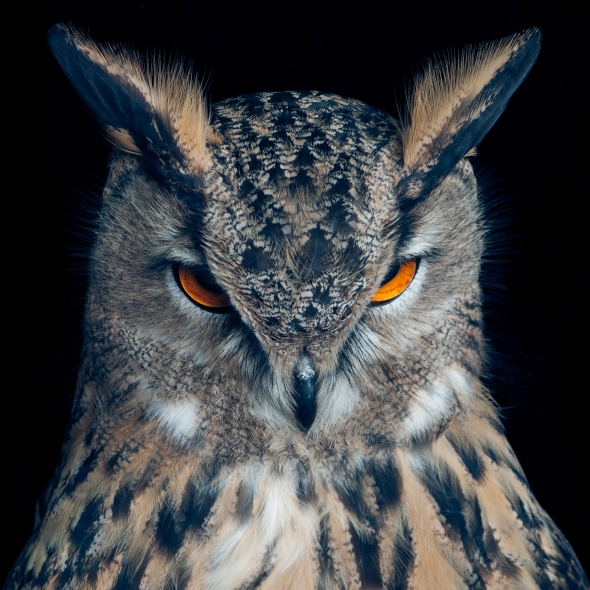 I saw my friend’s daughter the other day looking very cool.

So, I took some portraits of her…….

Arriving back from our trip round Europe, where we had half an hour of rain the whole time we were there, we drive off the ferry into a good old English downpour.

It doesn’t last though and the Summer of 2018 carries on and on and on, and it is wonderful.

After the shoot with the Archbishop I thought I might drop in to see a lovely couple that I had met whilst photographing for Modern Farmer magazine. Pat and Graham live on a farm in the shadow of Pen y Fan, in the Brecon Beacons and amongst many animals they had a Maremma sheep dog called Milo, who nearly became a Modern Farmer front cover star. Unfortunately he passed away, but they now have another Maremma called Maizie. A quick phone call and I popped round for a cuppa, to find the last of the sheep being sheared, including an old girl called Betty!

Students all over the country who didn’t quite get the grades they were expecting, (aaagh) were making frantic calls to University Clearing to see if they could get in to the same or the next best Uni. Here are a few online posters shot for the University Of Law Clearing Campaign and also some from their Set For Success campaign.

The Archbishop of Wales 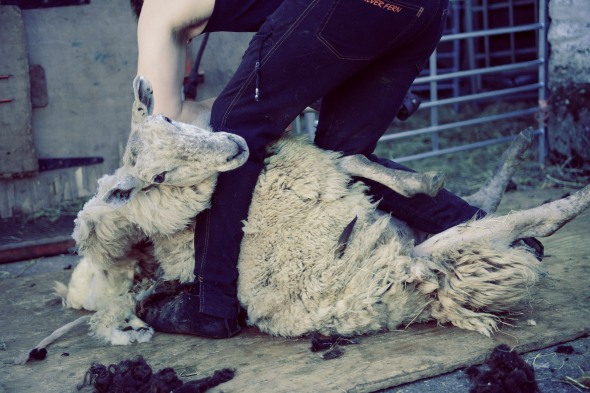 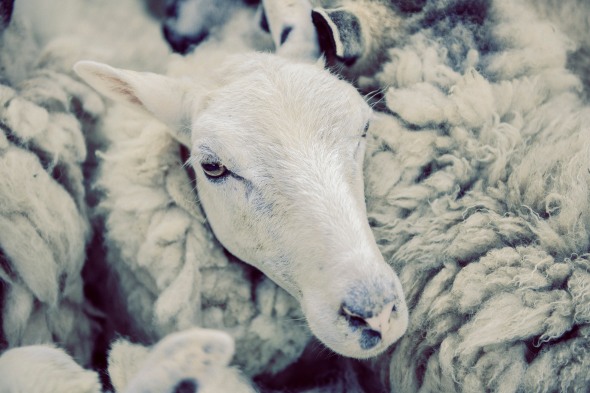 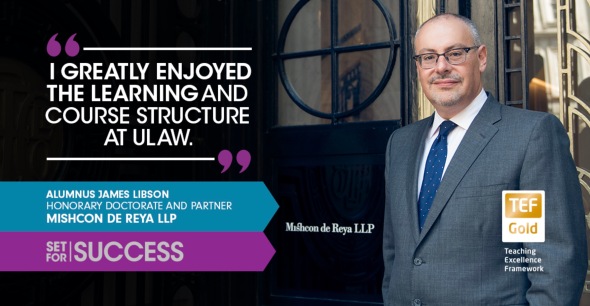